Domain Creek Playground has something for all ages

A visit to the brand new Domain Creek Playground in Parramatta Park did not disappoint the tribe! There was so much there that even though we visited during school holidays, there was plenty of equipment to play with and loads of different activities for tribe members of all ages. Here’s 5 reasons we loved this park. 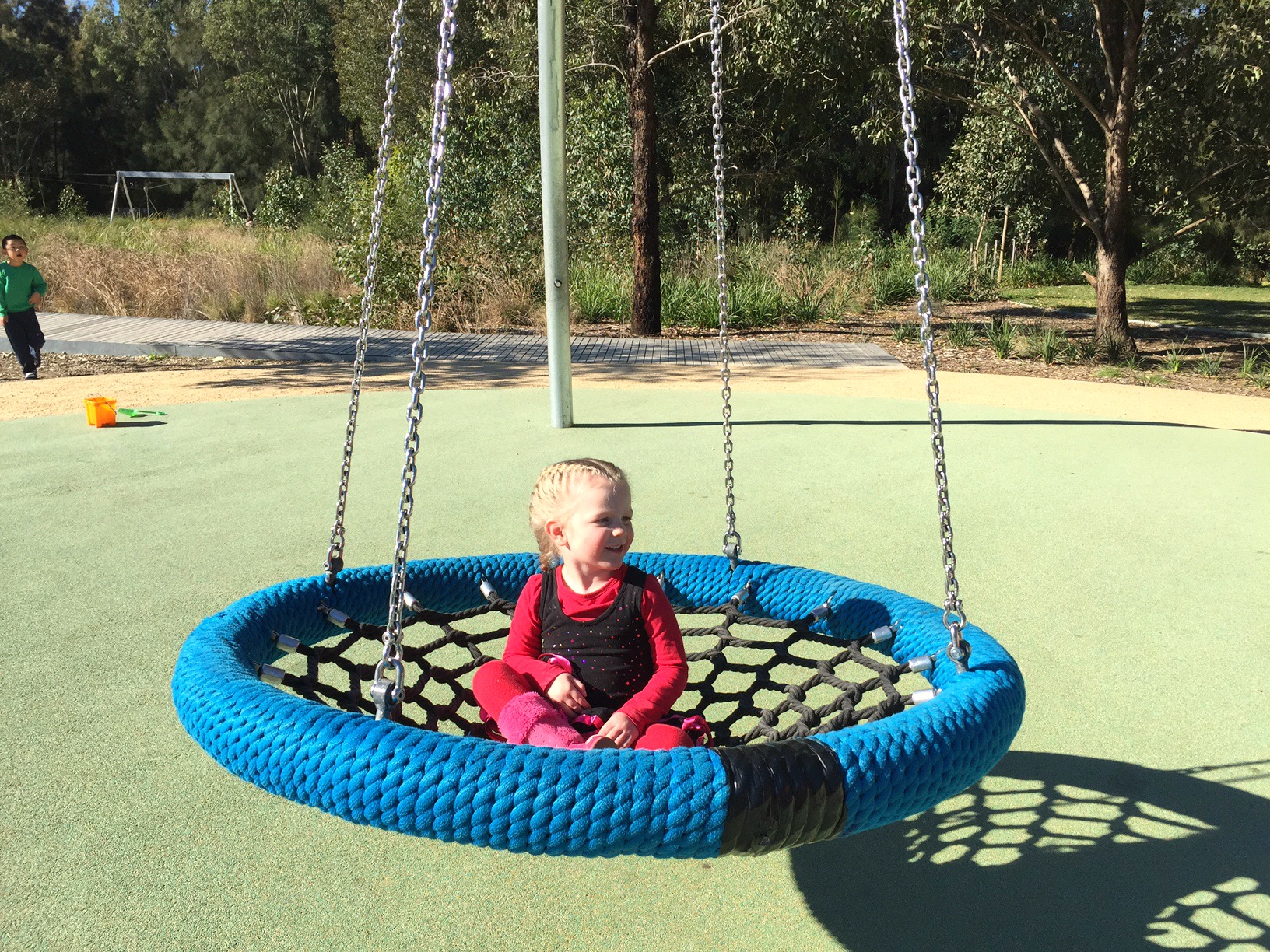 We didn’t have to wait very long at all to have a go on the swings at the park – usually there’s two swings at the park; a toddler swing and a big kid swing and usually you have to wait quite some time before having a rushed go so the next tribe can also have a turn. But not at this awesome playground! There was a swing set built into a huge sandpit so we sat nearby digging in the sand while we waited for a turn. Then we had a go along with three other kids at the same time. For the toddlers there was a bonus mini swing in a different part of the park also. Then when we were done, we headed over to the big spiderweb swing where we eagerly shared our ride with three other kids. This swing was built into a ginormous frame meaning the bigger kids could have a really big swing on it if they pleased and the little ones could just have a gentle turn. 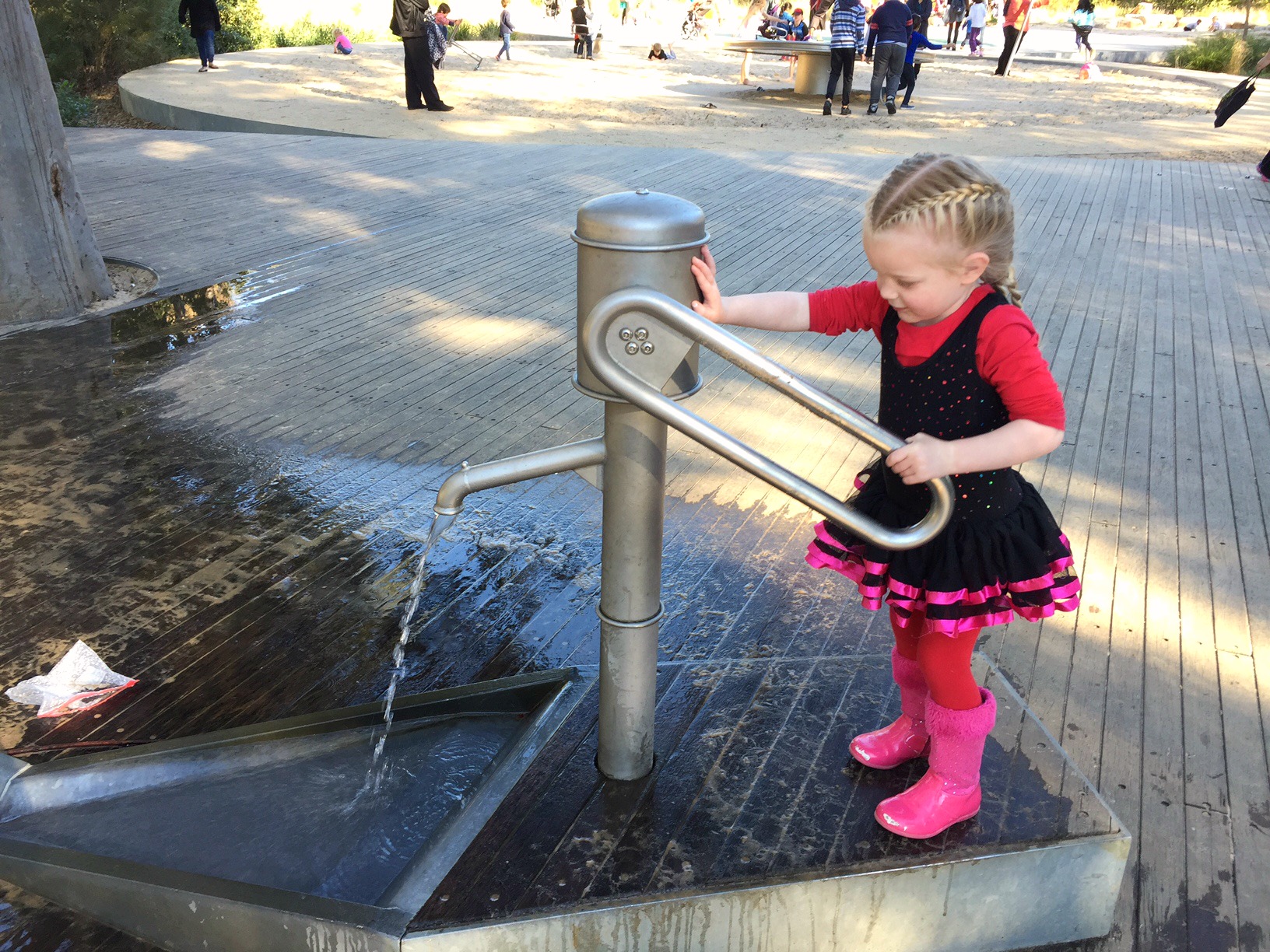 No matter what the weather is like, try keeping the kids away from water. For some reason, they’re drawn to it. So even though we visited during winter, the water play was still a very popular area of the playground. It helps to know it has water play features for warmer months if you’re visiting as you may want to bring a spare pair of clothes or even swimmers and a towel so the tribe can really splash about. We had to refrain from getting soaked during our visit but we sure did love making the water run down the water maze from the pump station. 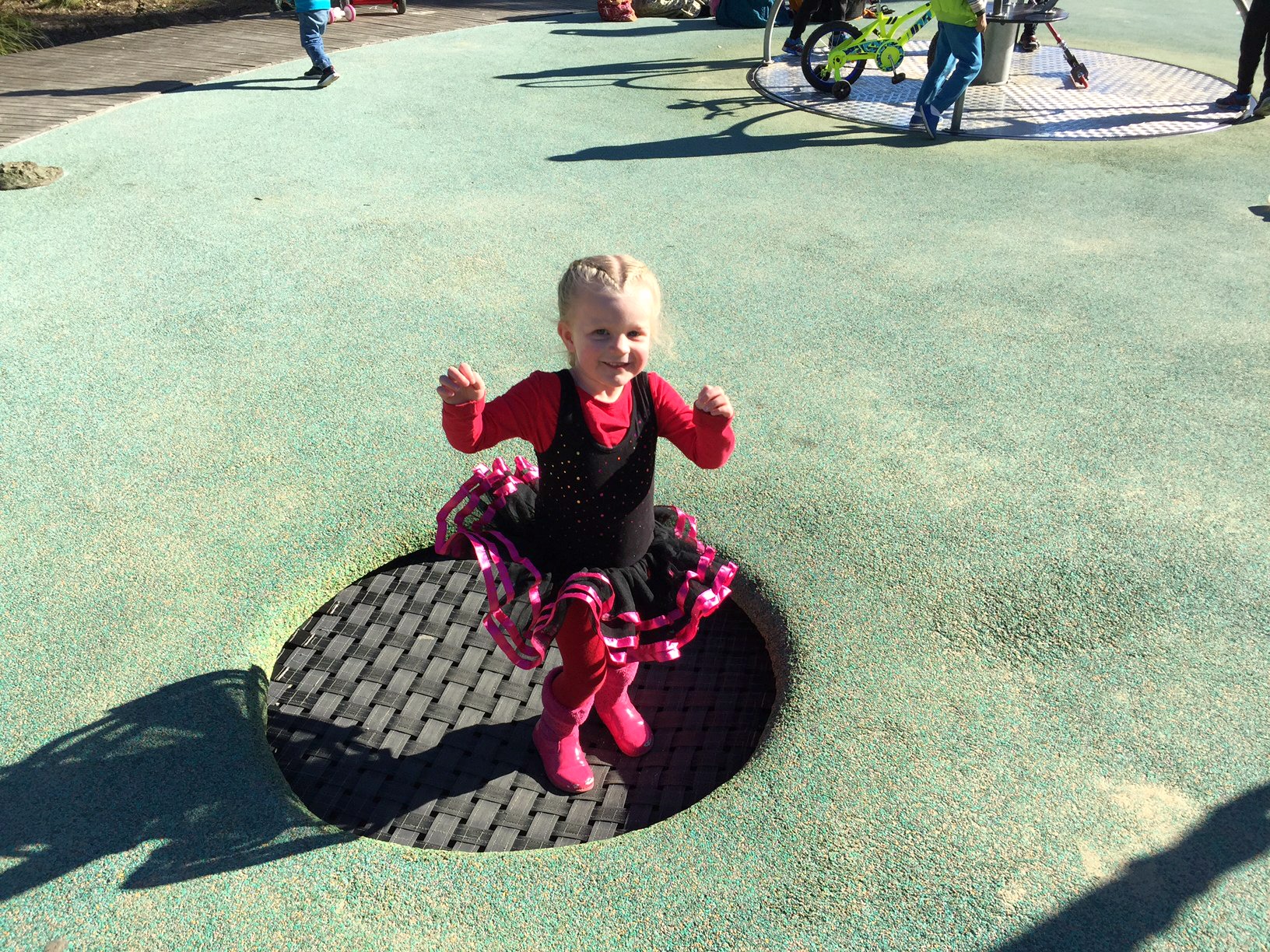 I love everything about these – as do the tribe. They’re so cute and fun and we were delighted to see that there were three of these babies at Domain Creek Playground. The best part about all of the activities at the playground is that the kids were naturally happy to end their turn to give another child a go on something because there was so much to play with and explore! We only had to wait moments to have a quick bounce. 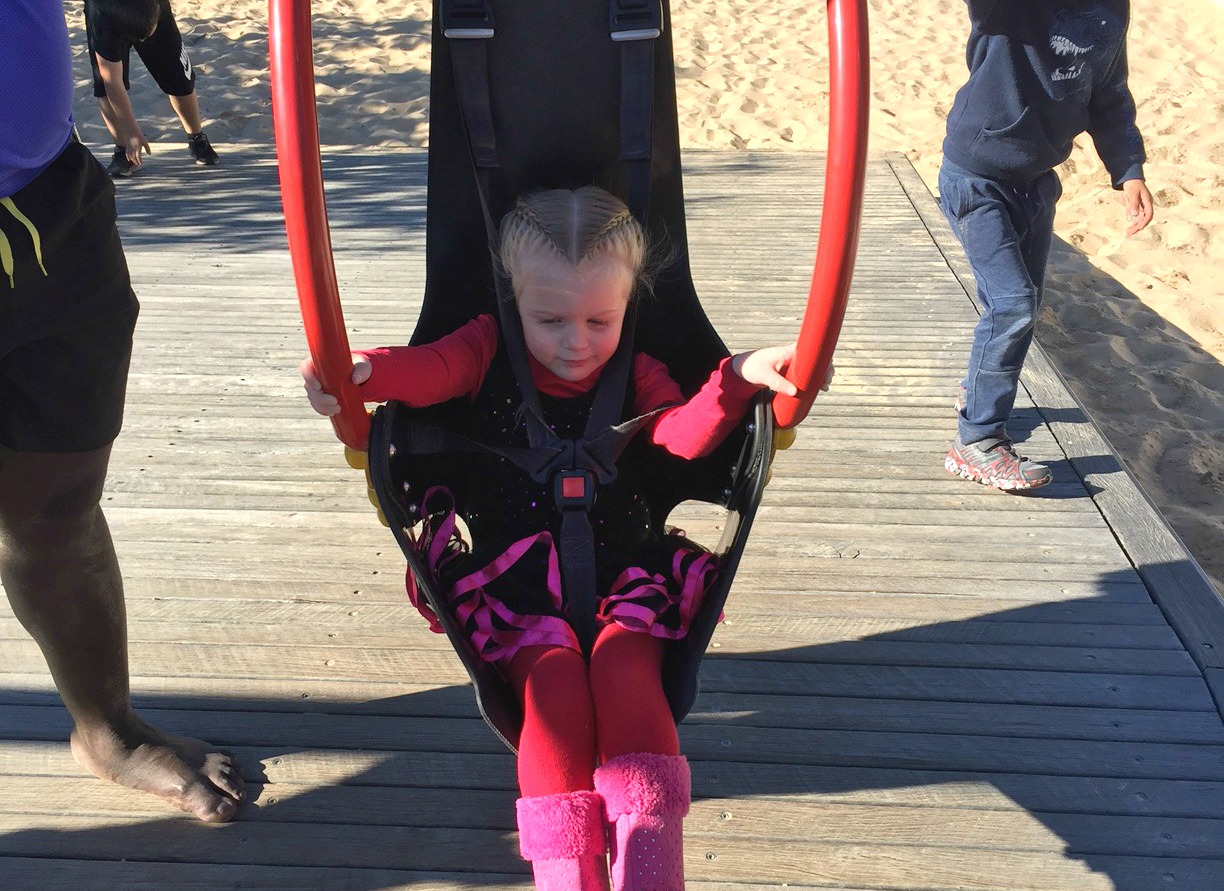 A flying fox for all ages and abilities

Usually the flying fox is just for the big kids but not at this amazing playground! They had one traditional one that the older tribe members could hang onto with their hands and jump on as they launched themselves off the ramp. But this one was so worth lining up for! You can see it has a four point harness for safety and handlebars and a seat for the little tribe members. My little one is not quite three yet and she had the time of her life on the flying fox. And I was super impressed that some of the older kids ran down to fetch her and bring her back up to me on the ramp after her ride. 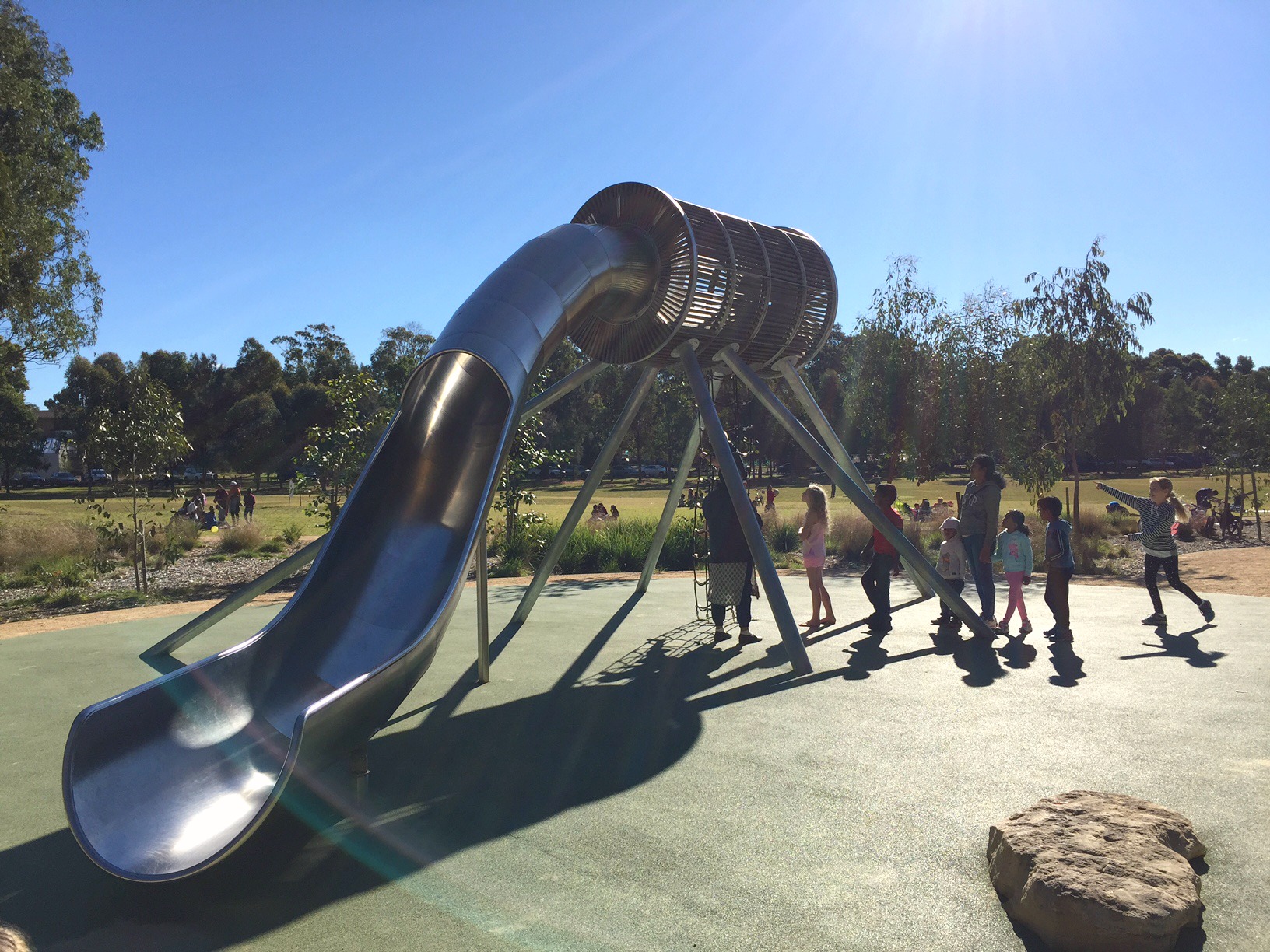 One heck of a slide

This slide looked so incredible, I was a little sad my older tribe member wasn’t with us to have a turn and tell us how it was, but the looks on the kids faces that came flying out of it confirmed it was pretty darn cool. We stuck to the smaller slide in the park which was awesome that there was an option there for the littler kids. Climbing into the big slide looked as fun as sliding down it. There was a rope ladder in the centre leading up to a wooden cubby at the top of the slide. There were plenty of kids in there gathered that were just hanging out and enjoying the views from above.

Have you visited an amazing playground lately? We’d love to hear about it.