When we caught wind that the brand new Bungarribee Super Park was open and only a short drive from home, we waited for a cracker of a day and piled the tribe into the car to check it out!

The tribe was not disappointed! They practically sprinted from the car to the huge tower looming ahead. There were multiple entries into the climbing tower with lots of fun activities to do inside! You could climb the giant steps and choose from one of four silver tube slides, two more suitable for younger kids and two more thrilling for the big kids and kids at heart.

There was also a rope bridge-tunnel which led to the seven-story high climbing tower. Once we arrived at the top platform we could see sweeping views of the Western Sydney Parklands. 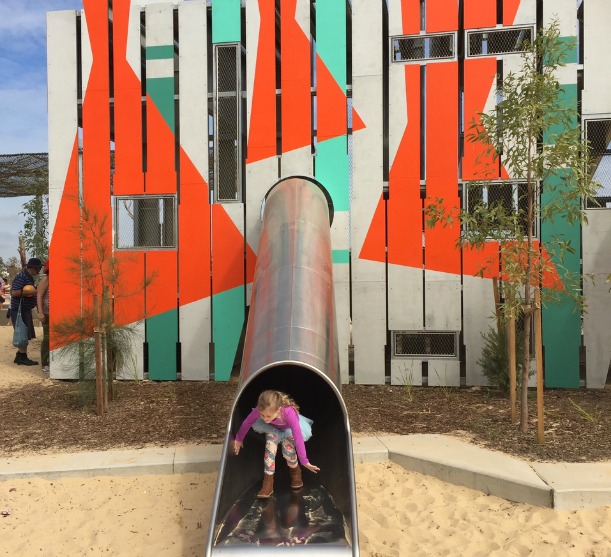 Bungarribee Super Park is surrounded by soft sand which the kids loved! They kicked their shoes off and had a great time testing out the swings, including a giant rope swing which we managed to fit the entire tribe on for a family ride!

There were sand mounds for little explorers and logs for balancing, and nearby there was a water park under a shade cloth, which was hard to tear the tribe away from! They could pump the water out of the taps and into the stone steps where they got busy splashing about.

The playground also boasted a separate swings area and a flying fox for the bigger kids. There were other fun ride on elements at the park including a see-saw and a spinning disc. 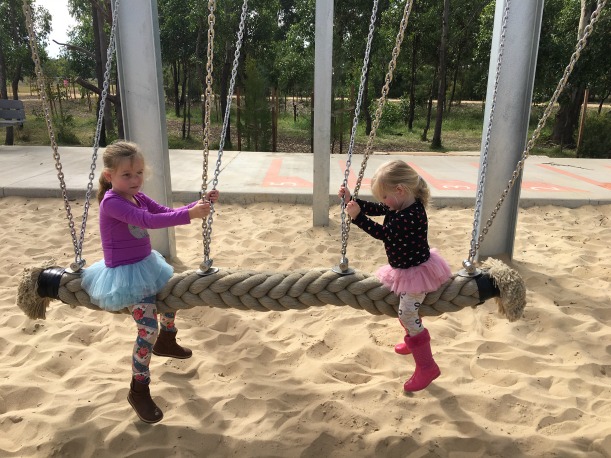 This park has been well thought out with paths surrounding it – perfect for scooters and bicycles and there are 20 barbecues and 13 picnic shelters meaning you can set up and enjoy the day at Bungarribee Park. There is plenty of parking and a brand new amenities building.

This playground was so fun, not even a bribe of McDonald’s could get the kids to depart. It’s certainly a place to take the tribe to if you haven’t been yet!