Winterlight Festival is a treat for the tribe 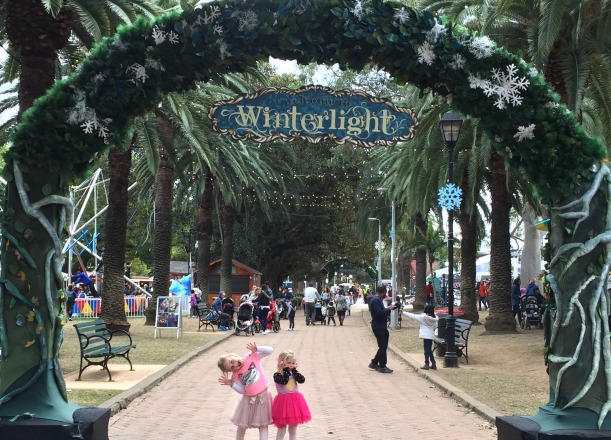 All we have been hearing about is the amazing outdoor ice rink at Parramatta’s Winterlight Festival, and I wasn’t too sure if our tribe were too little to enjoy the event, but we visited today and we were pleasantly surprised just how much there is for tribes of all ages.

We wandered into the Winterlight Festival and immediately we were all wowed with how wintery and Christmassy the event felt. There were special archways with snowflakes and fairy lights welcoming us at every entry point. Immediately the tribe spotted the free Circus Skills play area where families were enjoying some plate spinning, juggling, balancing and hula hooping. But there was so much more than we realised available for the smaller kids to do at Winterlight than we first thought.

We were drawn to the beautiful outdoors ice skating arena where we stopped and watched the older kids and their parents skating. My tribe who are 5 years and 2.5 years spotted the penguins and were begging for a chance to go ice skating. With only myself there to supervise and knowing my ice skating skills consist of me hanging onto the edge for dear life – you can imagine how keen I was.

I was trying to think of a way to escape this activity when I saw a sign saying ‘Kids Rink’ just around the corner. We wandered over and saw a much smaller ice skating rink that didn’t look nearly as slippery as the main one, and they had penguins for everyone as well as adjustable kids skates that strapped onto their shoes. Perfect! The girls had a blast and they weren’t in the way of more experienced skaters. I’m also pleased to report I didn’t fall or slip once walking on the ice in my shoes so I was able to give them some both some assistance when they needed it.

We also enjoyed checking out the Kids Creative Hub where there are free craft workshops running all week for the kids. We made it in time for the Penguin Friends craft activity but some of the other activities included making a snowflake garden and hot chocolate cups.

There were plenty of carnival rides including dodgem cars and a pirate ship ride as well as a beautiful carousel and of course the big ferris wheel overlooking the Winterlight Festival. Nearby we found the food stalls where you could try a bratwurst hotdog, Gozleme, pizza, gourmet soups or Dutch pancakes.

We had to make the tough decision between whether we wanted to have some snow play or ride on the ice slide. I may have convinced the tribe to opt for the ice slide because we hadn’t come dressed with gloves and clothes that could get wet in the snow, but even though the ice slide looks like so much fun – I will be honest and admit that I had to give the kids a big cuddle after their ride because it terrified them how fast they came flying down the slide. There were helmets for safety and no tribe members were hurt in the writing of this article – but if you have little ones that are afraid of travelling at great speeds – pack some mittens and gumboots and head to the snow play.