Voyage to the Deep at WA Maritime Museum 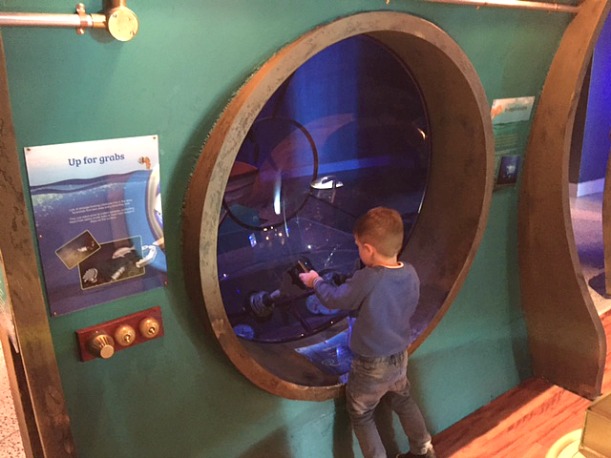 The WA Maritime Museum’s fantastic Voyage to the Deep exhibition is in its final month so if you haven’t had a chance to check it out, this tribe highly recommends a trip to the museum for a day of fun for the whole tribe.

Wow, where do I start? What a magical afternoon at the WA Maritime Museum!

We timed our visit to experience the Voyage to the Deep exhibition (on until 20th August) which provides such an adventure for kids; there’s so much to explore and interact with and it’s perfect for toddlers as well as older children. Based on Jules Verne’s 20,000 Leagues Under the Sea, it brings to life the adventures of Captain Nemo aboard his submarine Nautilus.

My two toddlers loved being able to run around the replica submarine, exploring the many activities on offer including taking to the steering wheels and peering through the periscope in the control room, climbing aboard the bunkbeds and searching through the lockers in the sleeping quarters, sliding down the escape hatch, and dressing up as a diver or squid! My eldest particularly enjoyed role playing in the kitchen and living quarters whilst my youngest spent ages playing on Captain Nemo’s pipe organ where aptly there was a music sheet showing you how to play ‘Row Row Row Your Boat’.

Outside the submarine large screens display lifelike animation of the ocean and sea life which the kids enjoyed running after and trying to catch! We spent a full hour in the Voyage to the Deep exhibition before I managed to prise my two away to explore the rest of the museum; I think my eldest would easily have stayed in there for at least another hour!

On the ground floor of the museum we found another fantastic children’s activity where they can colour in pictures of sea creatures, then scan them to bring them to life on a big screen displaying a colourful ocean scene. My son was delighted to see his crab and sea dragon swimming along!

We enjoyed looking around the various exhibits including Australia II (the racing yacht that won the America’s Cup in 1983), plus other historic vessels; most of which my eldest wanted to climb aboard after having free rein of the submarine so I had to hold him back! The kids seemed unfazed by the pretty scary looking shark in one of the exhibits, and had fun running around The Blue Room in which they could chase reef residents, in another interactive projection of the big blue sea.

One of the museum’s showstoppers has to be HMAS Ovens; a submarine that was used in the Cold War-era, situated on Fremantle’s slipway beside the museum. It can be viewed from the top floor of the museum and visitors can join guided tours of the submarine, however I was told it’s not suitable for young children, so hopefully I’ll get to take a tour another time.

As to be expected with a museum, everything we saw included an educational element, with history and facts displayed to inform visitors young and old. Before we headed home we spent some time outside viewing the memorial and Welcome Walls (listing names, the ship they travelled on and date they arrived) paying tribute to the many migrants who arrived in Fremantle from overseas, in search of a better life.

We enjoyed our visit so much that we’re already planning to go back before the Voyage to the Deep exhibition ends so that Daddy can experience it too! The WA Maritime Museum is a must-see when visiting Perth, and I assure you it will not disappoint!

GUEST TRIBE ~ @pommuminperth If you loved this article, be sure to follow Kimberley on Instagram to keep up with her tribe’s adventures!