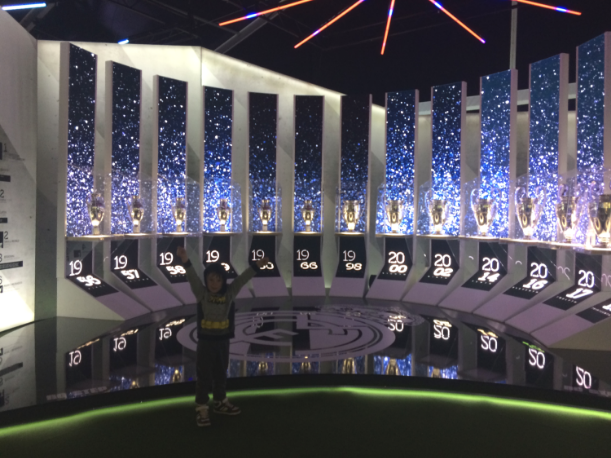 If you have football fans in the tribe, a visit to the Real Madrid Exhibition will have them buzzing from all the fun.

Bryony Sumner of Coasting Australia checked out the Real Madrid Exhibition for us – here’s what her tribe loved.

Some of my best memories growing up are of watching my local football team with my dad on a Saturday afternoon. It made me a firm football fan, and with World Cup fever still running high in our household (I was sure it was England’s year this time!) we were excited to be invited to visit the Real Madrid World of Football Experience while we were in Melbourne.

Located opposite Melbourne Museum in the Museum Plaza, the exhibition is dedicated to FIFA’s ‘Club of the 20th Century’ – Real Madrid, who have taken home the European cup no less than 13 times!

If you have a soccer fan in the family this is a must see. Being so close to the Golden Boots won by Ronaldo, Ballon D’Or trophies belonging to past team members and replicas of all the silverware won by the team over the years is enough to inspire any young player to greatness next season!

There are four immersive zones in the exhibition – you enter down a tunnel of players as if about to explode onto the pitch at the Santiago Bernabeu Stadium and are met with an astounding display of trophies and silverware. An audio-visual display highlights the glory of the club’s long success in the UEFA Champion’s League, and you can read first hand quotes and experiences of past players on the awards wall.

The next zone you enter is a gamer’s paradise – there are tablets where you can play ‘what would you do next’ and see if you too would put the ball in the back of the net, and there are gaming machines everywhere to enjoy.

After you have scored some virtual goals you get to test your game in the skills arena – step in and try and score as many points as you can before the clock runs down (I got nil – I was totally wearing the wrong shoes!) There is also a massive fusball table that we could have played for hours (it took that long to get the ball from one end to the other with just the 4 of us playing!)

We also loved the 360 degree cinematic zone which makes you feel part of the crowd at the stadium.

It’s the first time the memorabilia has been on display outside of Madrid and will be appearing in Melbourne until September 30th.