Lah-Lah has a new show in time for Christmas 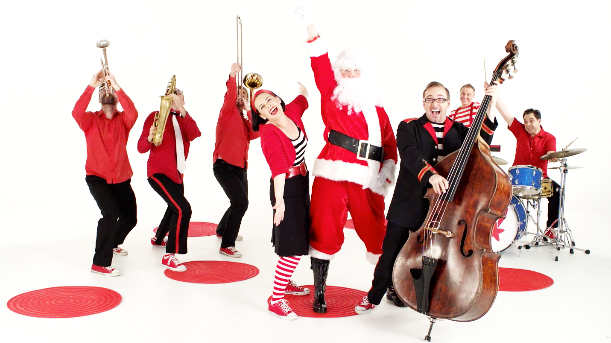 Get into the festive spirit with Lah-Lah and her Big Live Band in the lead up to Christmas with her new show, Lah-Lah Santa’s Got a Brand New Groove.

Lah-Lah is one of our tribe’s favourite TV shows and it’s even better in a live show! Here’s what we love about Lah-Lah and why you should take the tribe to see the new Christmas show.

The show has all new songs

If you love listening to Lah-Lah sing and the Big Live Band jam, then you’ll adore the festive cheer that Santa’s Got a Brand New Groove brings with it. The band includes Buzz the Band Leader, Mr Saxophone, Squeezy Sneezy on the accordion, Tom Tom on the drums and of course Lah-Lah. But it wouldn’t be a Christmas show without one more special addition to the stage – the tribe will be thrilled when they see the big man in the red suit, Santa Claus himself join in on the musical fun!

I can’t think of a better tradition to start with the tribe than to treat them to a live Christmas concert but one that’s geared to their interests! Our tribe are too small to take to Carols By Candlelight or evening events, so a live show that celebrates Christmas and is just the right length and on at the right time of day is a huge tick from me! We can’t wait until Lah-Lah Santa’s Got a Brand New Groove hits our local theatre!

As a pianist myself, one of the things I think is brilliant about Lah-Lah is how they make music and musical education fun for the tribe! My kids had never seen an accordion before they saw Lah-Lah, and could Buzz the Band Leader make the Double Bass any cooler with his very own Lola the Dancing Double Bass who twirls and spins in the show? And what’s even more amazing – Lah Lah herself and Buzz can be booked to come to your little one’s school or daycare centre from 2018 to teach the kids about music and musical appreciation.

You don’t have to spend an arm and a leg to take the tribe to a live Christmas show! Lah-Lah Santa’s Got a Brand New Groove is $25.50 per ticket and children under 12 months are free. Now that’s music to our ears! But be quick to get your tickets because Lah-Lah’s award winning shows have sold out around the country before! Plus one of the best parts of a Lah-Lah live show is that she has her famous meet and greets after the show meaning the tribe can say hi to Lah-Lah and the Big Live Band in person!

If you’re wondering where this fabulous show is appearing, it’s in lots of different locations all over Sydney meaning this show is accessible to tribes from all areas! But hurry as there is less than a week to go until the first show! Some of the destinations this fantastic show is touring include;

Have you taken your tribe to see Lah-Lah live before? Tell us about it!