More than just a playground… this nature reserve will blow you away! 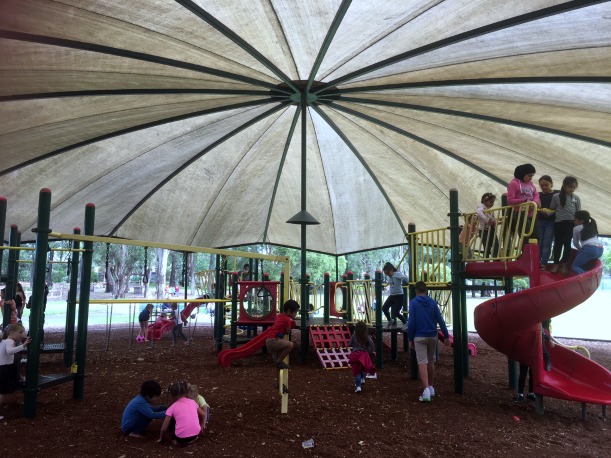 Central Gardens in Merrylands, NSW is an absolute gem of a place that you must put on your park bucket list if you haven’t already!

Today we took the tribe to visit and they couldn’t decide which part of the nature reserve they loved the best!

We packed a picnic lunch and set up not far from the carpark, where there was a playground under a large shade cloth and a Liberty Swing nearby for visitors in wheelchairs. This park had lots of areas to explore with a wooden ramp as an entry point, leading to a single slide, or if you want to ride in tandem there is an extra wide slide just beyond the rope bridge. There’s ladders to climb into the fortress and designated areas beneath to play as well.

When we moved on we discovered the animal enclosures which are free for the public to come and enjoy when they visit the nature reserve. We spotted wallabies, kangaroos and even a joey in his mother’s pouch! There were also lots of birds to visit including Australian natives such as the Kookaburra and a very friendly galah. There were also three emus that were more than happy to run alongside the kids at the fence. They were just as curious to see us as we were to see them!

Then there was park number two which was epic! Under a giant shade sail, this park was absolutely buzzing! There was a flying fox, monkey bars, slides for toddlers, slides for older kids and a giant curly slide! There were climbing frames and ladders, chain bridges, rocking ponies galore and plenty of park benches surrounding the park for the parents to retreat to.

Alongside the second playground there was a huge grassed area where kids were playing a game of cricket or kicking around a soccer ball. There were also paths all through the reserve making it perfect for the tribes that brought their scooters and bikes along!

There were plenty of picnic tables and barbecue facilities too if you wanted to make a day of it. And if you took a nice stroll through the grounds, there is also a duck pond which leads you to a cascading waterfall and a water feature.

The tribe had such an amazing day at Central Gardens, and we did it all for free! It’s a must to see if you haven’t yet paid a visit.